Cookson: ‘Technology has moved on’ from 6.8kg weight limit on bikes


The 6.8-kilogram (14.99-pound) weight limit imposed by current UCI regulations is on thin ice, but hasn’t fallen through just yet.

“I understand why that rule was brought on in the first place, though I think that technology has moved on,” UCI President Brian Cookson said to VeloNews in a phone interview.

The current rule, which bars complete bikes from weighing less than 6.8kg when used in UCI-sanctioned competitions, was implemented as part of the Lugano Charter. That charter, written in early 1997, is still the basis of the UCI’s technical rulebook. The weight limit rule is widely viewed as outdated and unnecessary by the cycling industry, as composite technology has advanced to the point where a bicycle can be built well under the limit and still pass industry standard safety tests.

A complete rewrite of the rule is not imminent, but will likely be part of an ongoing restructuring of the current rulebook.

“Weight is a crude way of looking at it really. It’s quite easy to have bikes now that hit the 6.8kg limit,” Cookson said. “I wouldn’t like to throw it open completely. Strength is the most important thing and I wouldn’t like to see bikes breaking underneath riders, we see enough of that in crashes. So we can take a look at this from the other end of the telescope in terms of wheel and frame strength and what that means in terms of weight.”

Any changes will be slow and deliberate. Removing the weight limit rule would require that it be replaced with some sort of safety standard; lowering it would require a detailed analysis of the strength of modern composites to determine just how low the limit could go.

“Any modifications to the rules will be targeting smooth transition rather than sudden changes. This is my personal preference and I am sure that the cycling industry and the teams share that opinion,” Dmitris Katsanis, a member of UCI’s Equipment Commission, said to VeloNews earlier this year.

Enhanced strength and safety testing would likely result in the expansion of the UCI’s frame approval program to include safety testing for both frames and wheels. Currently, the program simply ensures that frames used in competition meet a collection of UCI regulations surrounding shape and geometry.

The UCI already has a wheel test in place, though, much like the 6.8kg rule, it is frequently derided by the cycling industry as a useless metric. The UCI’s test involves running a large weight into a wheel and examining how it fails — not whether it fails, or the level of force leads to failure, but what the wheel looks like once it has exploded. The test has been ridiculed for its focus on the aftermath of a crash than avoiding a crash in the first place.

The governing body announced the impending implementation of a wheel approval program in 2012, but that program has yet to materialize.

Implementing a safety protocol above and beyond the current European Commission standards would be complicated and likely quite expensive. But Cookson’s focus on strength leaves few other options available — short of leaving the 6.8kg limit as it stands, of course.

The 6.8-kilogram (14.99-pound) weight limit imposed by current UCI regulations is on thin ice, but hasn’t fallen through just yet. 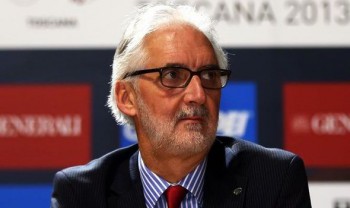